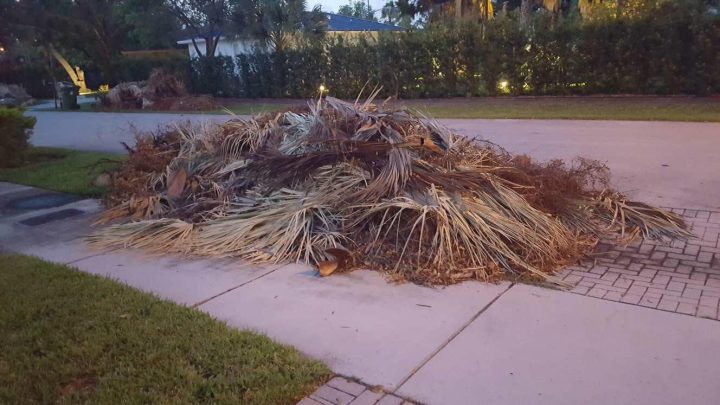 A woman sits alone in her living room in Plantation, Florida as a storm rages outside. Her dog, Asher, sleeps soundly under the credenza. The TV glows in the distance. Both canine and human seem unfazed by the hurricane-strength winds raging just outside the little townhouse they call home. Hurricane Irma has made landfall.

The woman is Barb Schecter. She’s 75 and has lived in South Florida for 60 years. Of course, she’s moved around, but this isn’t her first hurricane. She’s survived Hurricane Cleo of 1964, Betsy of 1965, and the infamous Andrew of 1992. She is also my aunt.

“I didn’t really think about [it]…” Schecter said, “Okay, here’s another hurricane, thank God it’s moving away and we’re not gonna get severe damage.”

Schecter’s house suffered no damage during Irma, except for the fact that the trees on her little stretch of property were knocked down. Her power went out for only 30 minutes since she’s on the same power grid as the hospital, and it is essential that the hospital have power.

Though Schecter suffered no property damage and only had a brief power outage, she didn’t have Internet for about 10 days after the storm. One of her sons, Brian, lost power for several days. Her other son, Mitch, had some property damage, but nothing major.

Earlier this fall, Florida, Texas and the Caribbean were ravaged by Hurricanes Katia, Jose, Harvey and Irma, causing billions of dollars of property damage and millions of people to go without power and running water.

During Hurricane Andrew in 1992, Schecter was living in Davie, Florida and did the same thing; she sat on the couch watching TV and waited for the storm to pass. After the storm, Schecter went to work, nervous about how her co-workers were holding up because she worked in Miami. After Schecter came back from work, her neighbors got together and barbecued to celebrate the fact that they had all lived through one of the worst hurricanes to hit Florida in years.

As South Florida and other damaged areas recover, the entire world looks on wondering what caused the hurricanes and how people will proceed with cleanup. Just like when Katrina hit New Orleans in 2005, it could take years for South Florida to fully recover.

Although my family wasn’t severely affected by the hurricanes, they know people who were, and are willing to do anything to help them get back on their feet. Hurricanes are a part of life in South Florida, yet the rest of the world wonders when will storms of this caliber happen again, and how can people be prepared for the next one.

Sydney Spector is a senior at MPH and transferred this year from Fayetteville-Manlius. She writes, designs, and takes photos for The Pebble Magazine. When she’s not working on her AP United States History homework, she enjoys reading, listening to music, and sleeping. She has four little mixed breed dogs named Jessie, Casper, and Radar. She enjoys swimming, skiing and watching cute animal videos on YouTube. She is also a certified lifeguard and can teach swim lessons. View all posts by Sydney Spector