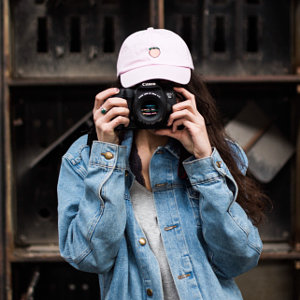 Processed with VSCOcam with 4 preset

On a warm September day in New York City this past fall, Amina Gingold unexpectedly received a phone call from Vogue, the most iconic fashion magazine in the world. Gingold was asked to shoot photos of pop-star Tinashe for the magazine’s website.

Shooting photos for Vogue is an impressive accolade and a rare feat for a 19-year old.

A hobby that began when Gingold was young has become her profession, despite the fact that she’s still in college. Gingold’s passion for shooting photographs began in middle school. Her father bought her a Nikon D3200 camera because he could sense how excited she was to participate in a photography camp the upcoming summer at Stanford University. Her excitement stemmed from her love of Duane Michals, a well-known American photographer. She aspired to shoot just as he did.

“He’s really amazing, and I remember, forever ago, my dad gave me a book of his, and I just remember looking at it all the time and being obsessed with the way he shoots,” Gingold said.

She said she admires Michaels’s work because he presents “beautiful sequences that create a narration-type story with text.”

Gingold, MPH Class of 2016, is in her sophomore year at the School of Visual Arts in New York City, where she majors in Bachelor Fine Arts Photo/Video. Her schedule is constantly hectic. The night she received the call from Vogue, she was also juggling another photo shoot with rapper and music producer Melo X.

“I get this call about Tinashe, and the first thing that came to my head was, ‘How am I going to do both?’” Gingold said.

Gingold managed to postpone her photo shoot with Melo X, as last-minute scheduling is nothing new to the young photographer.

“I immediately changed my plans, because, honestly, living in New York, that always happens. My plans will flip-flop by the minute,” Gingold said.

Theresa Henderson, chair of the visual art and design department at MPH, taught Gingold in three classes. She said that Gingold is successful in photography because of her courage to take creative risks.

“Creative risk-taking is often what makes people great artists—they’re willing to put themselves out there,” Henderson said.

Henderson added that Gingold was always hungry for opportunity, as the distinct, yet essential, mindset that all artists must have is something Gingold commonly used.

Henderson mentioned one of Gingold’s unique photography projects while at MPH, depicting a girl laying in a bathtub filled with milk.

“So ‘Okay, I’m gonna go out and fill a bathtub with milk,’” Henderson said, laughing, recalling one of Gingold’s unique project announcements.

Gingold recalls a message her father passed on to her when she was younger regarding her passion for photography.

Gingold added that her father’s advice is ingrained within her, and she thinks of it every now and then. However, her father’s quote is not what fuels her to shoot photos; she’s driven wholly by her passion for photography.

“Every single day, I’m pushing and trying to go further like that,” Gingold said, “but even though it’s really hard work, and it’s a lot sometimes—and sometimes I just want a break—it doesn’t really feel like work for me. I like doing it. It’s something that I’m interested in doing and creating.”

Gingold enjoys photographing a wide range of people. Her photos that may seem unflattering to others are beautiful to her. In the end, it’s her photo. It’s her image she displays, and her message she illustrates. Henderson mentioned Gingold’s growth in her class, and how she was able to find her niche on her own by becoming more meticulous with her work.

“She started to look not only for the pretty picture, but the emotion, and she really started to push the feel or the overall mood of a piece, which is really sophisticated,” Henderson said.

Gingold’s drive is the biggest factor that contributes to her success as a photographer, as well as her ability to capitalize on her ideas.

“A lot of people have ideas, we all have ideas all the time, every day,” Henderson said. “Not everyone follows through with them.”

Gingold said she captures her perspective on the world, and paints the picture the way she sees it. That’s how she connects her work; her photos are shot through her own lens.

“I feel like the way I see life, and the way I look at people, is how I capture people,” Gingold said. “So I think that’s what makes my work different from everybody else’s; because whenever I capture, it’s the way I see the world.

“So maybe I didn’t take the most flattering photo but I take it the way I see it being beautiful.”

Founder of The Swish Report, huge Syracuse and Knicks Fan! View all posts by Daniel Mezzalingua