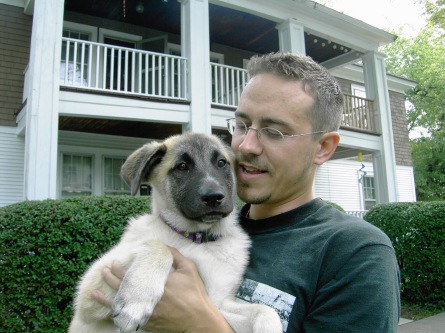 Mr. Leclercq and a young Zoé

In May 2006, Zoé was born on a farm in Kentucky. Her mother was a Samoyed-husky mix named Zaya, and her father was a German Shepherd named Zeus. Zoé was a beautiful blend of the three breeds, and she was highly intelligent. At 10 weeks old, she made the long journey to her new home with Alex Leclercq in Syracuse.

Just before Leclercq’s wife, Tina, discovered Zoé’s litter on a website, Leclercq had lost his previous dog, Terrapin. Devastated, he didn’t think he was ready for another to hold such a place in his heart. That said, most people aren’t ever really ready for something great to enter their lives. Great things always come when we aren’t prepared for them, perhaps so we don’t have a chance to overthink them.

From the moment the two met, Leclercq hoped that Zoé would become an integral part of his job at MPH. He knew that she would need to be certified at least as a therapy dog and be well-trained if she was going to roam the halls of MPH and work with young children, assisting in teaching them how to read.

In just a few short months, Zoé had learned basic commands, and she was learning how to behave well around strangers. In the years following Zoé’s basic training, she would learn a new trick each year. One year she learned to speak on command, and another year she learned how to catch popcorn midair, a trick that proved useful when Leclercq wanted Zoé to catch flies mid-flight around the house. Zoé was trained to understand patterns of language and she used the skill to follow Leclercq’s conversations with other people.

Zoé knew the difference between play time and training. Typically, walk time was when Leclercq would train her. The duo would go to the park and work at learning  new commands. Leclercq worked on training Zoé so she could go on to become certified as a therapy dog, knowing that he wanted to bring her to MPH for the children to enjoy.

With Leclercq and Zoé’s hard work; Zoé became a strong candidate to become a certified therapy dog. Once certified, she began working at the Mundy Branch Library with Leclercq; she worked in a program called Tails to Tell. She loved it. The program’s goal was to build confidence in children when they read aloud. Reading to a dog reduced the fear of failure as the pups can’t speak back in the traditional sense.

As Zoé grew older, her presence at MPH became anticipated, and more faculty and students alike bonded with her. Zoé brought joy to every classroom and hallway at MPH. While Zoé was on campus you could hear her feet padding down the hallways, and on occasion you would see a tennis ball fly down the Bradley hallway, followed by an excited Zoé. Leclercq frequently brought her to Lower School classrooms, and every time, Zoé would be welcomed with tons of hugs and an abundance of kisses. She never minded. She enjoyed making others happy. It was in her nature.

In December of 2014, MPH announced a financial crisis, Leclercq felt as though Zoé People were sad, people were worried, concerned; kids also. He decided at that point to bring Zoé regularly every Friday and use her presence as a way for people to feel comforted and to look forward to something that would be at school.

Every Friday, Zoé rode into school with Leclercq and spent the day on campus. She was open to hugs and lengthy belly rubs, as any good dog always is. With Zoé Fridays, it was no longer just students who welcomed her presence. Parents who came to campus to bring things to their children noticed that she was there and took a strong liking to her as well. Some even brought bags of treats for her to have on campus, which were kept in the Campus Shop. She would stop by and put both paws up on the counter, as if placing an order for herself.

“She would burst into class,” Leclercq said, “and be followed by a swarm of little kids.”

Every aspect of Zoé’s presence was joyous. She brought light into the lives of people when they needed it most. She never was on a leash at school, she was trained to be without one. She roamed freely, bringing a smile to anyone she would sniff out. She frequently would walk down the Bradley hallway to the Lower School.

Eventually Leclercq learned Zoé was sick. She’d had trouble breathing, so she was taken to the vet where Leclercq and his wife were told that Zoé had late stage cancer.

“On her last day, which was December 22, she had had a horrible night,” Leclercq said, “she couldn’t breathe, and she had to stand to be able to breathe so she couldn’t lay down anymore.”

He knew then it was time to say goodbye to his beloved Zoé. The morning she died, the two went on one last walk together.

“I live right next to Bellevue School,” Leclercq said, “and we went on a walk near Bellevue School, near the playground there and there were little kids that were late to school. There was one little girl who was walking to school with her mom and Zoé walked right next to her for a couple of minutes and the mom asked me if it was okay and I said ‘Don’t worry Zoé she’s a therapy dog.’So Zoé walked right next to her. That little girl was beaming she was so happy. That dog was almost as high as she was, [the girl] had never had a big dog like this walk freely next to her and it just made her day.”

For the entirety of her life, Zoé brought joy to many in the community, both at MPH and in Syracuse. Nothing held her back, and her smile was infectious.

“On her last day,” Leclercq said, “she still made a bunch of little neighbors happy.”

Suzannah Peckham, who has been in the journalism class for three and a half years, is one of the leaders in the class she is currently the Editor-in-Chief. Along with writing stories for the Pebble, she also edits other people’s stories and mentors some of the new class members. After graduating from high school this year, Suzannah hopes to attend college and major in Business Law with a minor in communications and economics. In her free time, Suzannah loves to watch shows on Netflix and spend time with her two dogs, Hank and Olive, Olive will be attending college with her. View all posts by Suzannah Peckham

There was an error retrieving images from Instagram. An attempt will be remade in a few minutes.